For several years I noticed the bright red berries and distinctive leaves of Hawthorn yet knew nothing about it. It’s not that the information about it is particularly hard to find, I was just busy with the abundance of the already known fruits I’d found growing wild.

Hawthorn’s medicinal use is widely documented in many countries. Indisputably one of natures best medicinal plants for cardiovascular issues. Studies have found it successful in treatments ranging from Congestive Heart Failure to Angina and even removing LDL the “bad cholesterol” from the bloodstream.

My introduction came by way of a Eastern European forager who explained to me in limited English and a lot of gestures, that the berry was for his heart. He went though a lengthy description of drying the berries and then crushing them and then finally using his Bialetti coffee maker to produce a tea which his wife and he drank daily. My second discussion of Hawthorn came from two English lady foragers, who simply said “adding it to brandy or gin made an excellent liqueur” Unfortunately for me, they told me so as they were harvesting the last of the berries in late October time. 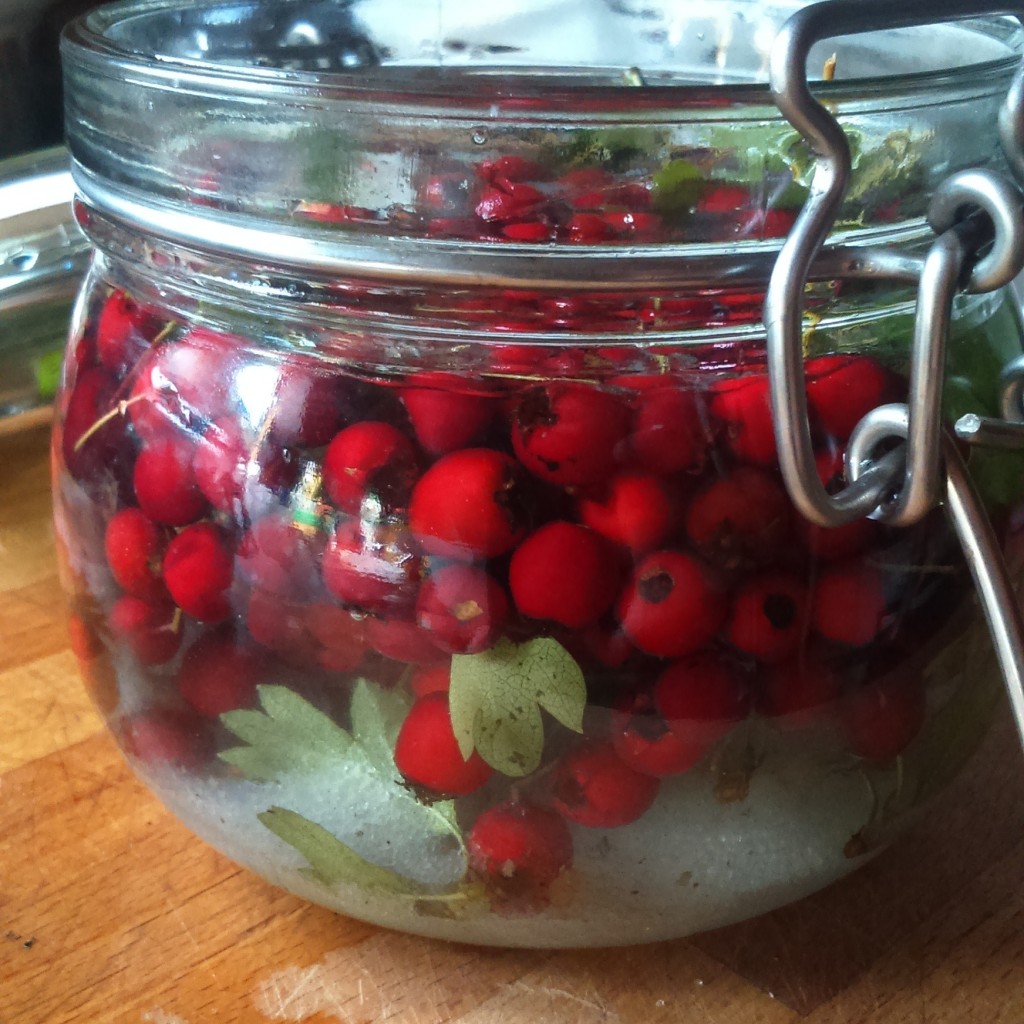 Having high hopes for Hawthorn this year, I made it my business to forage for them early. I’ve made a tincture with 70cl of dry gin, two pints of berries and 6 tablespoons of sugar which will apparently take 12 to 24 months to fully mature. It looks stunning in the jar which is good, because unlike other fruits which only need to be in the alcohol for a week or so, Hawthorn soaks for a month or longer.

In researching I noticed that leaves are also used when making tea so I’ve included a good handful in my experiment.  I didn’t top and tail the berries, so I will have to strain sediment, but I’m ok with that!

Most of the Hawthorn I’ve encountered has been canal side lining the towpaths, but on this particular forage, I found it as the main cultivar of a well trimmed up hedge bordering a public common. It was an exciting discovery. Only this week I had been contemplating what my possible options for windbreak hedges might be for the smallholding. Unlike many other foraged herbs and medicines there seems a nearly universal acceptance  of Hawthorn’s effectiveness. I have to say, I am looking forward to taking this medicine.